Turing was highly influential in the development of theoretical computer science, providing a formalization of the concepts of algorithm and computation with the Turing machine, which can be considered a model of a general-purpose computer.

Turing is widely considered to be the father of theoretical computer science and artificial intelligence. Despite these accomplishments, he was never fully recognised in his home country during his lifetime due to his homosexuality and because much of his work was covered by the Official Secrets Act.

During the Second World War, Turing worked for the Government Code and Cypher School (GC&CS) at Bletchley Park, Britain’s code breaking center that produced Ultra intelligence. For a time he led Hut 8, the section that was responsible for German naval cryptanalysis.

He devised a number of techniques for speeding the breaking of German ciphers, including improvements to the pre-war Polish bombe method, an electromechanical machine that could find settings for the Enigma machine.

A true legend and a wonderful person. May he rest in peace.

There’s a lot of reports that some of online services are blocking users’ access if they are on private browsing mode. One of these services is The Washington Post which chosen “Democracy Dies in Darkness” as its motto. It’s very funny that the very news agency that claims to fight for democracy and freedom is tracking its users and collects their personal information.

If you visit The Washington Post website with private mode activated on your browser, you’ll see such notice:

I do support asking for subscription or limiting the amount of articles a user can read on free plan but limiting people from using private mode is not acceptable. The point of private browsing is to not being recognized nor  followed.

This is actually much more worrying that this is a bug from browsers. A browser should not let websites know if a user is browsing web in private mode. Not being tracked should not be a luxury. A user should be in private browsing mode by default and if they wanted, they can turn it off.

Tracking people in private mode should be considered as a violation of people’s privacy and browsers should be forced to put more effort to make private browsing much more safer and easier for users.

There’s videos of blue pigs attacking Black Lives Matter protesters who wanted to pull down the statue of Andrew Jackson in front of the White House, after press was reportedly told to leave by the secret service.

Andrew Jackson was the 7th president of the United States and was know for being a brutal slave owner who owned up to 161 slaves who were forced to build his fortune or beaten into servitude. Needless to say he was a staunch opponent of abolishing slavery.

The protesters didn’t succeeded in taking the statue down.

There’s have circulated that KKK planned to attack protesters who have gathered to protest against white supremacy, blue pigs violent, and for the removal of the racist monument in Richmond, Virginia. Armed Black Lives Matter protesters are now protecting other protesters from the Ku Klux Klan at the square around the defaced statue of racist confederate general Robert E. Lee.

If all lives matter, why aren’t you mad too?

The article cited an unspecified intelligence report, but in her ruling, Judge Rainelda Estacio-Montesa said the accused had offered no proof of the allegations. The judge added that there had been no government influence on the case, and said freedom of the press “cannot be used as a shield” against libel.

Messa and Santos Jr. face up to six years in prison for the conviction, but have been released on bail pending appeal.

The verdict was horrifying to hear, but not unexpected, said Ressa, who said attacks on her news organization dated back to when Duterte took office in 2016.

“We came under attack because we kept challenging the impunity of the government in the drug war,” she said.

“We exposed the propaganda war, the information operations that the Philippine government is doing against its own citizens.”

As a result, she said that “President Duterte and the Philippine government would like you to think I’m a criminal.”

“It was seeded on social media, it was repeated insidiously by government officials, pro-government accounts, and then four years later [I’m] given a guilty verdict as a criminal by a court.”

Amnesty International condemned the ruling, saying “this verdict is a sham and should be quashed.”

Ressa said she isn’t resigned to jail time, and still has “hope that there are men and women in the judiciary who will uphold the rule of law.”

“I will look for justice. I won’t stop,” she said. 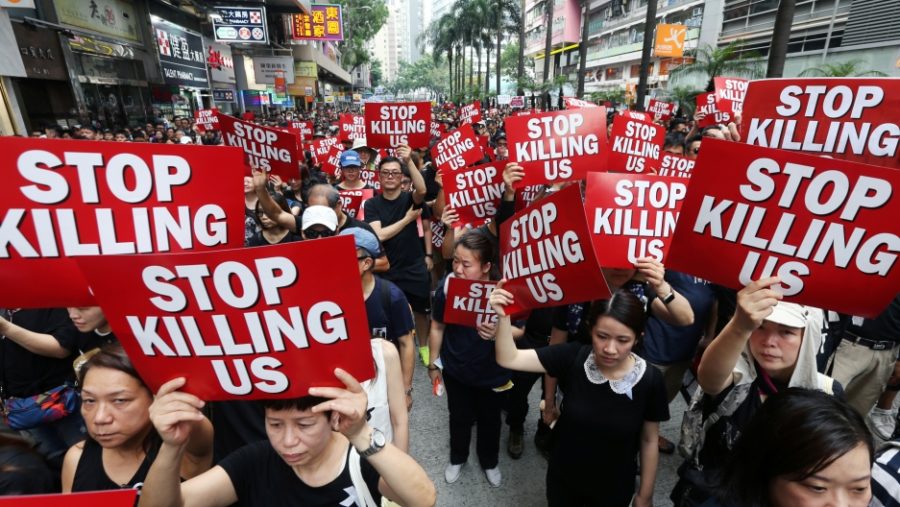 Now, more than ever, citizens must be able to hold those in power accountable and inspire others through the act of protest.

Protecting your electronic devices and digital assets before, during, and after a protest is vital to keeping yourself and your information safe, as well as getting your message out. Theft, damage, confiscation, or forced deletion of media can disrupt your ability to publish your experiences. At the same time, those engaging in protest may be subject to search or arrest, or have their movements and associations mapped. They could become targets of surveillance and repression.

There are risks associated with attending a protest, and taking steps to mitigate them can go a long way in ensuring you—and the data you value—are kept safe. This guide outlines steps you can take before, during, and after a protest that will help maximize your effectiveness and keep yourself and your data more secure.